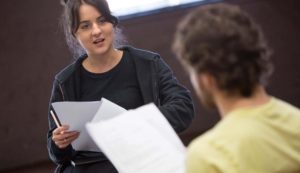 Imagine you discover a magic spell that could motivate any client to do exactly the right thing. One catch – it is in an unfamiliar language. Pronouncing the syllables has been revealed to you, but you are unfamiliar with the words. And, obviously, it is not something you would naturally say. At first you struggle just to get the sounds out. But it works like a charm. No more debating or persuading clients or providing reassurance when the market gets volatile. How hard would you work to learn how to say the spell?

Describing your differentiator can have persuasive (if not magical) powers. The question is will you commit to learning an effective way to say it?

We help advisors live into unique brands. An early step is creating a brand script – a description of how you get clients where they want to go. The specific construction communicates value tailored to the target client in a powerful way. Our biggest challenge is persuading advisors to adopt it.

Have you ever struggled to learn a new way to describe your business? When one has been suggested maybe you responded with some of the most frequent objections we hear:

As Michael Port said in our interview of him and in his books, representing your company, advocating for principles that will help your clients succeed, is performance. Performance takes practice. It is not good the first time through. Or the second. Or probably the 10th.

Some advisors have said to me they can’t recite something that was written by someone else. They need to write it in their own language. To anyone who believes that I have a question.

Envision the most memorable role you remember from a movie or the stage. The one that moved you. That inspired you or brought you to tears. That clinched the Oscar or the Tony for the actor. Then consider this. All of the words spoken by the actor were written by someone else.

Meryl Streep does not allow outsiders into rehearsal. She says rehearsal is nothing more than bad acting and she does not want anyone to see her acting badly.

You do important work. Your advice can change a client’s life. Describing what you do in an effective way gives them an opportunity to realize the benefit you represent. It may take a little discomfort to get it right but I think you would agree they are worth it.

Are You Different in the Right Way?

Download this free worksheet “Am I different Enough?” to find out.

7 Ideas to Make Your Virtual Client Advisory Board Work

How to get valuable, actionable input in a virtual environment.

Are Client Advisor Boards worth the trouble?

After conducting hundreds of advisory boards we can say without hesitation Yes!

Send me my free report!
Scroll to top