In a recent post, Seth Godin points out that creating a competitive advantage takes guts.

A few days ago, I wrote about the importance of identifying a niche marketing to it. It makes you more attractive to prospective clients, and makes you referral. I noted that it is counterintuitive.

It is more than that. Marketing guru Seth Godin noted in a recent blog post that it takes guts. 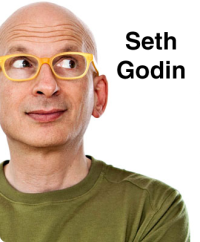 Like others before him, he points out that working harder is not going to make you more successful anywhere near as much as working smarter or different. He also made a point I had not considered before – that simply getting more efficient at your work turns intellectual work into factory work. And that engages you in a race to the bottom.

He noted that overcoming the inertia to get better at your craft, or to be different in your profession, and to create a competitive advantage takes guts.

Why are we so insistent on describing ourselves and our practices exactly the same as all other advisors? Why do we describe what we do and for whom we do it the same way so many others in our industry do? You would think that we would understand that using the same words as everyone else will be utterly ineffective at giving prospects a reason to choose us instead of anyone else. Part of the reason is because being creative is really hard. And part of the reason is probably because it is scary to do something different than everyone else.

It is tempting to believe that everyone has chosen to do something one way because it’s the best way. It is not – it is the average way. And it takes a measure of courage and self assurance to make a different choice than your peers.

So, as you lay out plan for the coming year, be brave. Be different. Achieve more.

Are You Different in the Right Way?

Download this free worksheet “Am I different Enough?” to find out.

7 Ideas to Make Your Virtual Client Advisory Board Work

How to get valuable, actionable input in a virtual environment.

Are Client Advisor Boards worth the trouble?

After conducting hundreds of advisory boards we can say without hesitation Yes!

Send me my free report!
Scroll to top